The Secrets of Ayurveda

The word Ayurveda is made of two parts – ayus meaning life and veda meaning sacred knowledge. We believe food and life-knowledge cannot be separated. This is what guides our efforts to bring authenticity to our food – a tradition of using ancestral knowledge of ingredients to serve nourishing food.

Down
the
food
lane

The history of Indian cuisine consists of cuisine from the Indian subcontinent, which is rich and diverse. As a land that has experienced extensive immigration and intermingling through many millennia, the Indian subcontinent has benefited from numerous food influences. The diverse climate in the region, ranging from deep tropical to alpine, has also helped considerably broaden the set of ingredients readily available to the many schools of cookery in India. In many cases, food has become a marker of religious and social identity, with varying taboos and preferences (for instance, a segment of the Jain population consume no roots or subterranean vegetable; see Jain vegetarianism) which has also driven these groups to innovate extensively with the food sources that are deemed acceptable.

One strong influence over Indian foods is the longstanding vegetarianism within sections of India’s Hindu and Jain communities. At 31%, slightly less than a third of Indians are vegetarians.

Around 7000 BCE, agriculture spread from the Fertile Crescent to the Indus Valley, and wheat and barley began to be grown.  By 3000 BCE, turmeric, cardamom, black pepper and mustard were harvested in India. The ancient Hindu text Mahabharata mentions rice and meat cooked together, and the word “pulao” or “pallao” is used to refer to the dish in ancient Sanskrit works, such as Yājñavalkya Smṛti. Vegetarianism was facilitated by the advent of Buddhism and a cooperative climate where a variety of fruits, vegetables, and grains could easily be grown throughout the year. A food classification system that categorized any item as saatvic, raajsic or taamsic developed in Ayurveda.

Later, arrivals from Arabia, Central Asia, and others had a deep and fundamental effect on Indian cooking. Islamic rule introduced rich gravies, biryani and non-vegetarian fare such as kebabs, resulting in Mughlai cuisine (Mughal in origin), as well as such fruits as apricots, melons, peaches, and plums. The Mughals were great patrons of cooking. Lavish dishes were prepared during the reigns of Jahangir and Shah Jahan. The Muslim meat dishes includes bovine, ovine, poultry and seafood dishes. The Nizams of Hyderabad state (1700s-1947) perfected their own style of cooking with the most notable dish being the Hyderabad biryani, often considered by many connoisseurs to be the finest of the main dishes in India.

The Portuguese and British during their rule introduced cooking techniques such as baking, and foods from the New World and Europe. The new-world vegetables popular in cuisine from the Indian subcontinent include tomato, potato, sweet potatoes, peanuts, squash, and chilli.

Sattvic diet is a diet based on foods in ayurvedic and yogic literature that contain the quality (guna) sattva. In this system of dietary classification, foods that decrease the energy of the body are considered tamasic, while those that increase the energy of the body are considered rajasic. A sattvic diet is meant to include foods and eating habits that are “pure, essential, natural, vital, energy-containing, clean, conscious, true, honest, wise”. A sattvic diet can also exemplify the religious principle Ahimsa, the doctrine of non-violence, or not causing harm to other living things, which is one reason that yogis often follow a vegetarian diet. A sattvic diet is a regimen that places emphasis on seasonal foods, fruits, dairy products, nuts, seeds, oils, ripe vegetables, legumes, whole grains, and non-meat based proteins. A sattvic diet is sometimes referred to as a yogic diet or yoga diet in modern literature. In ancient and medieval era Yoga literature, the concept discussed is Mitahara, which literally means “moderation in eating”.

Tamasic foods, are foods whose consumption, according to Yoga, are harmful to either mind or body. Harm to mind includes anything that will lead to a duller, less refined state of consciousness. Bodily harm includes any foods that will cause detrimental stress to any physical organ, directly or indirectly (via any physical imbalance). They are, however, sometimes necessary during times of great physical stress and pain. They help dull the pain and lower consciousness, allowing the body to repair itself. Such static foods may be deemed necessary in times of war or great distress. Static foods stimulate and strengthen the lower two chakras, but will not assist in beneficial development of the higher chakras. In fact, they are usually detrimental to the advancement of the higher chakras. Such foods include: meat, fish, egg, onion, garlic, scallion, leek, chive, mushroom, alcoholic beverage, durian (fruit), blue cheese, eggplant (only in Jain customs), opium, and stale food.

Having said that, we are not here to make moral judgements on your dietary choices, but to help improve the health and nutritional elements of whatever your food choices be. Some of the ingredients (mentioned in the recipe below) have been long used in Indian and Ayurvedic cuisine for their diverse benefits. 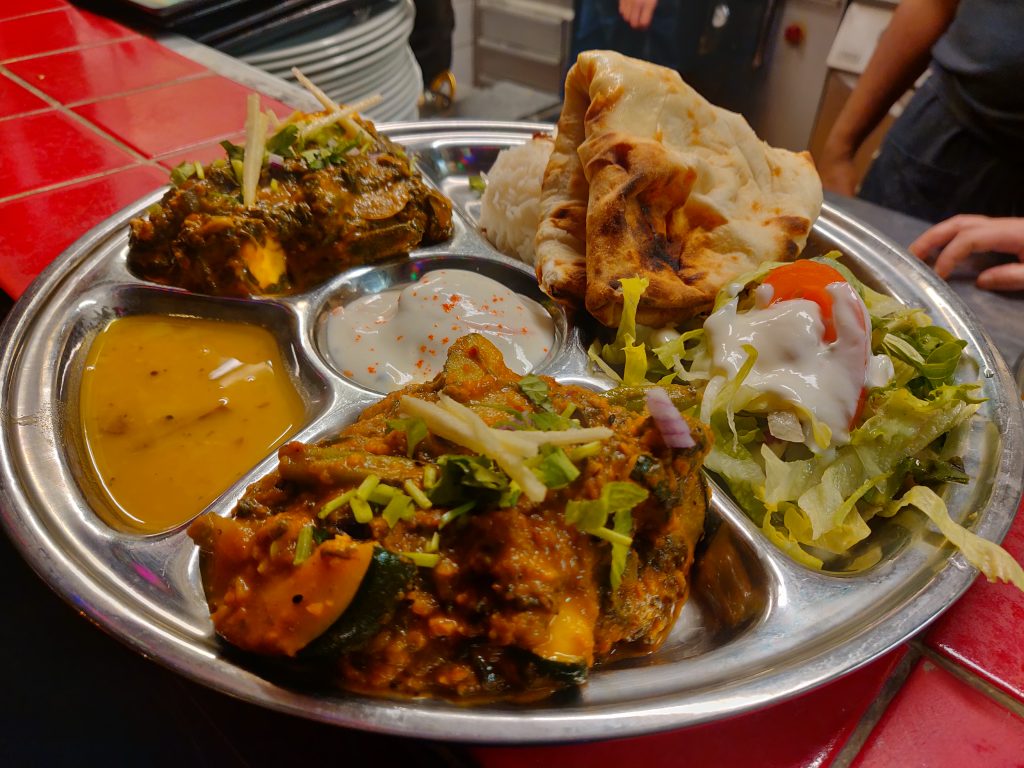