Award-winning Cumin Club in Vasastan is an Indian restaurant with influences from all over the country. And like many other Indian chefs, Abid Khan has his own secret spice mix.

Luntmakargatan may be the city’s best location for those who want to establish themselves in Stockholm’s own Little Asia. On the narrow back street to Sveavägen, pubs with genuine orientation in
Japanese, Vietnamese, Korean and Indian flavors are crowded. Even though the Cumin Club’s owner and head chef – Abid Khan – was born in Bangladesh; his cooking is based on precisely the spice mixes and characteristic collisions of vegetable and meat dishes which in many ways characterize Indian cuisine.

He came to Stockholm in 1989 as a 20-year-old to greet his brother, and remained. After working around many Indian taverns, including the now defunct premium Indian Annakhan on Riddargatan, Abid Khan chose to open his own restaurant with his wife exactly ten years ago. And it is against the tradition of well-composed dishes that the Cumin Club rests, rather than trying to become yet another in the line of Indian budget pubs with a big strong on the menu.

When I came to Sweden I was missing my mother's food, so when I called home I had one hand on the phone and the other in the pot. "Add some coriander", "more chili!", She tipped through the handset. That's how I learned how to cook good, homemade food. But it is a completely different thing to do restaurant food. When I started looking for a job there were only a handful of good Indian chefs and restaurants. 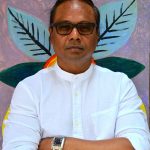 He learned more and more, both in Stockholm and back with chefs in rural areas in Bangladesh and India, but all the time with the dream of one day opening his own. In 2006 he brought along Annakhan’s chef and opened the Cumin Club.It was about to tighten the pipe. After one year, the head of the kitchen did not receive a residence permit and Abid was left alone in the kitchen. A decade later, they received a Business Achievment Award in London this summer by the international food magazine Curry Life Magazine.

We had a tough time in the beginning and were very close to bankruptcy. Today, my wife is in charge of the economy and I keep the food, says Abid Khan.His closest plan is to return to Bangladesh and southern India soon and pick up two chefs.Just as it is impossible to speak generally about Italian cuisine, the same applies to India. The farther south, the spicy food. Cumin Club wants to make its own merger, which is why the menus often get quite long.

I like a lot of barbecue and curry dishes – and fresh spices. I make my own mix twice a month with about 16 different spices. I mean the Cumin club is like a club for spices, everyone dancing together in my kitchen.